"History of the farm
In 1970, Mr. José Braga de Oliveira, together with his sons Sebastião, Zezé
and Heleno, encouraged by Mr. Sr. Antônio Fortes Bustamante, began cultivating coffee on the property. Ten thousand coffee trees were planted, of the Red Catuaí variety. In 1979, most of the plantation died from frost. Even with this great loss, brothers Sebastião, Zezé and Heleno did not give up on growing coffee and planted the varieties Yellow Bourbon and Mundo Novo in place of the deceased trees.
In 1980, Sebastião Braga inherited part of the property which he named Sítio Batista. Following the example of his father, he and his wife Célia, with the help of their sons, Danilo and Denilson, continued the family’s work. That same year, during the coffee harvest, Danilo met Maria Aparecida and they started dating. In 1984, they married and both continue the coffee legacy of the Braga family.
In 1991, Sebastião began working as a civil servant, having left caring for the coffee fields to his wife and sons. In 2008, Danilo and Maria Aparecida acquired part of the property. Children Daniela and Daniel, together with Mr. Joaquim Carlos, a former farm worker, continue working with coffee.
Coffee has always been the main source of income for the Braga family. Even with the division of the lands over the years, José Braga’s children, grandchildren, great-grandchildren, and great-great-grandchildren continue working with coffee. All the care and dedication has been passed from generation to generation and remain until today. It is a story of many sacrifices, much care, love and zeal that, allied with the ideal climate, enable the production of high-quality coffees.
Some processes are done by women, Maria Aparecida and Daniela, who are responsible for drying the coffee on the patio and in the mechanical dryer, for gathering the coffee at the end of the day and bagging it to place in the dryer.
Danilo’s children, Daniela, 35, and Daniel, 31, help their father with some tasks. Daniela helps with post-harvest processing (drying the fruits on the patio and in the mechanical dryer, cleaning the patios and warehousing the coffee). Daniel helps with the harvest, transporting the coffee and with several post-harvest processes, such as washing the cherries and drying on the patio and in the dryer.

Coffee processing system
The harvest was done by hand and with hand-held mechanical pickers. After picking, the coffee was taken to Danilo’s house, where it was washed with the help of a water tank and a sieve to separate floaters. Then the coffee was taken to the patio and spread to dry. Each morning, around 9 AM, the coffee was spread and raked throughout the day until 3 PM when it was piled. When it was half-dried, it was placed in the mechanical dryer to reach the correct humidity. After drying, it was kept in a rest box for about 30 days. Then it was processed and prepared, stored in high-barrier bags to keep moisture out.

Concern about quality
The producers harvest the ripest fruits possible, with only around 15% green cherries. In post-harvest processing, the greatest concern is with cleaning. When the coffee arrives from the fields, it is washed and the floaters are separated. This washing process is done by hand by Danilo and his son Daniel. Then the coffee is taken for conventional drying or African beds until it’s half-dried, when it’s placed in the mechanical dryer or remains on the patio, depending on availability of the dryer.
Before receiving the washed cherries, both the patios are cleaned with brooms or blowers, and the same occurs with the dryer. When the coffee is spread on the patio, the drying process is handled by the entire family, mostly by Maria Aparecida, her husband, Danilo, or their daughter, Daniela. They also have the help of son Daniel and Mr. Sebastião, Danilo’s father, as well as Mr. Joaquim, a former worker who still lives with the family. Each hour someone rakes the coffee. When it’s piled, it is covered with a cloth to keep it warm and dry during the night.
When the coffee is half-dried, it is taken to the mechanical dryer at a temperature of 40ºC. The coffee is store in husk in rest-boxes for a few days before being processed. After processing, it is stored in high-barrier bags so it doesn’t lose quality or absorb moisture." 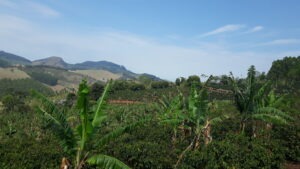 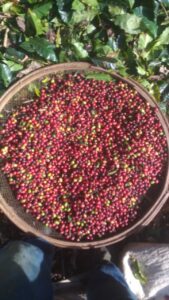 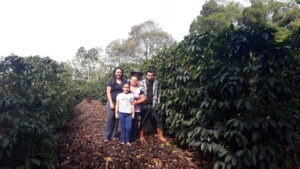