Finca Nejapa is located on the slopes of Cerro las Ninfas, nested along the famous Apaneca-Ilamatepec mountain range, in Apaneca, Department of Ahuachapán. The farm owner, Gloria Mercedes Rodríguez Fontán, is a 4th generation coffee grower that has been actively involved in the development of high-quality coffees in her area. Nejapa has been in her family since the 1920s.

Nejapa, has been previously awarded by Cup of Excellence 4 times with different plots. Gloria’s small farms account for 12 CoE auctions prizes and 2 national winning awards. The farm is approximately 22 hectares with an altitude ranging between 1,480 to 1,580 masl. Coffee is grown in an area of some 18 hectares subdivided in 7 plots grown with different varieties, including Red and yellow pacamara, red, orange and yellow Bourbon, yellow and red caturra, geisha, typica and elefante.

The farm has about 4 hectares of native forest distributed along the farm helping preserve our soils, microclimate, flora and fauna. Every cultivated plot in Nejapa is fully shaded with native trees and ingas, helping many birds, insects and mammal species move and live without major disruptions.

To the east, on the higher part of the farm, it neighbors with the Ninfas Lagoon, an extinct volcanic crater and sanctuary for migrating birds. From here you have a view of every peak from the mountain range finishing with the Izalco volcano, named the “pacific lighthouse” which many years ago used to be in constant eruption and was Gloria’s family trip at night, to enjoyed from its frequent eruptions in the distance. It also has a beautiful view to the town of Apaneca and you can also see the Pacific Ocean shoreline and the Acajutla port from this spot.

Other cultural practices include manual weed control, shade tree pruning, off-shot thinning, soil conservation practices, wind-break barriers management, root and stem bending, as well as a renewed attention to better nutrition of the plant and soil life improvement, among others. A huge importance is obviously given to harvesting only the ripest possible cherries, measured visually, tasting mucilage and using refractometer. Cherries are processed the same day, dried on raise beds only for 25 days, aiming for 10.5 to 11% moisture, then coffee is rested for a few days and then stored on grainpro plus jute bags.

One of the main works performed at the farm is the coffee nursery, which is done only with seeds selected within Gloria’s farms to guarantee the purity and adaptability of our coffee plantations in the future. There are at least 5 families involved every year in the works performed at the farm, with some other 30 temporary staff needed for the harvest. One of the advantages of this farm is easy access, as its only 2 ½ kilometers away from the Apaneca town. It also gets water from the crater lagoon that makes some works easier, such as foliar fertilization and nursery irrigation.
Winning Lot
The selected lot to compete is Elefante variety, a proprietary variety discovered in Glorias farm around the year 2011 that has been studied and developed by the family along the years. Elefante has both Ethiopian landrace and the world-famous Bourbon pedigree according to a genetic fingerprinting analysis carried out a few years ago with the World Coffee Research (WCR).
Elefante cherries are nearly two times heavier than Bourbon due to its larger amounts of mucilage, its mucilage flavor express both a honeysuckle or ripe papaya/tropical fruit very similar to the Ethiopian strains. Although the cherry is round, the seed express some long characters similar again to some heirloom types. In some beans it is also possible to find a little horn on one of the sides of the green bean. It is not rare to extract around 9 to 15 drops of mucilage per cherry.
The tree is a low yield variety and has a high cherry-to-green bean ratio, meaning it gets smaller green beans ratio per cherry weight from this variety in comparison to Bourbon, nonetheless, screen size is a bit better due to the larger size of the screen of Elefante.
Finca: Nejapa
Plot: Papael
Coffee plot area: 1.7 hectares
Variety: Elefante
Process: Natural 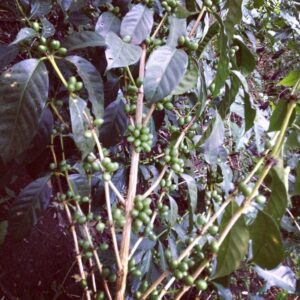 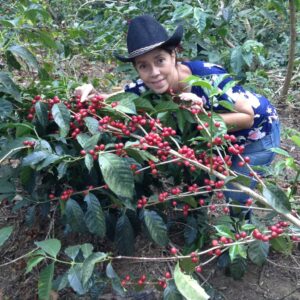 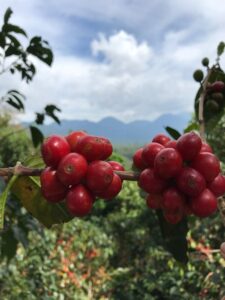 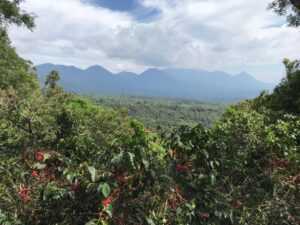 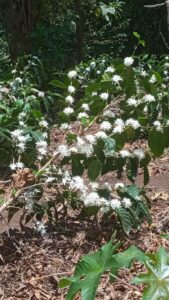