"History of the farm
Vitor Marcelo Queiroz Barbosa, the son of Danilo Barbosa, was born in 1981. A descendent of a family of coffee producers, he has been among coffee plantations since his youth, thus from an early age he knew the path he would follow and his passion for coffee has only grown since then. At 14, he decided to work with his father, so he studied at night to help out on the farm during the day.
The coffee producing tradition has been in the family since the first decade of the 20th century. Vitor’s ancestors passed the coffee heritage from generation to generation, beginning with his great-great-grandfather, Elias Barbosa, then his great-grandfather, Claudio Barbosa de Paula, to his grandfather, Jairo Barbosa de Paula, and now he works with his father, Danilo Barbosa, himself a fourth-generation producer.
Fazenda Cachoeira was acquired in 2005, being the apple of the eye in specialty coffee quality. The company has several youths and women in its workforce, from production to administration, all are engaged in professional growth and understanding quality coffee production.

Coffee processing system
The lot that participated in this competition passed through several steps during post-harvest processing. It was initially evaluated for fruit maturation by measuring its brix. Then it was selectively harvested by hand at the ideal bean maturation point. After harvesting, the coffee was stored in bags in the shade for 32 hours, passing through a controlled fermentation process. Then it was spread on African beds for slow drying until reaching the idea humidity for warehousing. After drying, the lot was stored in bags for 25 days, then processed. Finally it was taken for final processing at a cooperative warehouse

Concern about quality
The DBarbosa Coffee group is concerned with producing coffee in an ethical, sustainable and socially responsible manner, working in accordance with the laws of Brazil and the standards of sustainable agriculture established by RAS (Sustainable Agriculture Network). All the lots at the farm are evaluated during the harvest, when they are still on the patio, separating everything harvested each day. The rest boxes are separated according to each coffee’s profile. 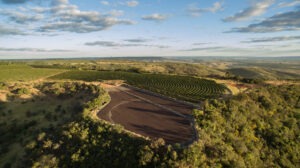 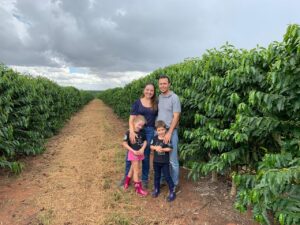 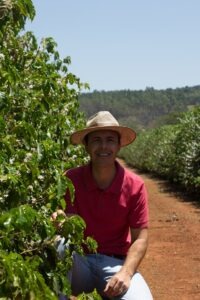 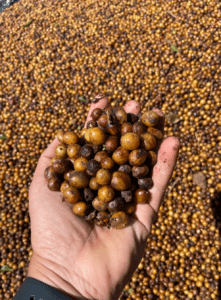 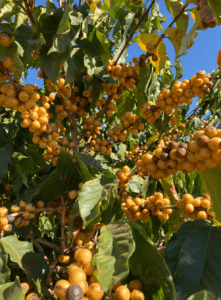