CEPCO
REGION: MIXTECA ALTA
The Organization of Coffee Producers of Yucuhiti, Producers “Tee Nenu” and Small Mixtec Producers. The organization is part of the project presented by the Comercialization Agropecuaria of the State of Oaxaca (CAEO) entitled "Towards a horizontal and vertical model of good coffee practices and the commercialization of sustainable coffee".

The municipality of Santa María Yucuhiti, is located in the northwest of the state of Oaxaca, in the Mixteca region of the Tlaxiaco District, in the mountain range where the Sierra Madre Oriental, the Neo Volcanic Axis and the Sierra Madre del Sur converge, known as the Mixteco Knot, which gives rise to the diversity of endemic flora and wildlife.

This municipality has an extension of 72.7 square kilometers and a total population of 6,551 inhabitants, distributed in 43 localities.
The predominant type of tenure is communal. The seven thousand hectares that correspond to the territory of Yucuhiti, 98 percent is communal. There are 1,772 community members recognized in the presidential resolution of February 25, 1942, but there are around a thousand unrecognized with proof of possession. In Llano Grande there are 180 comuneros, and in Buena Vista 190 or 200.

Although it is true that it is communal property, for agricultural purposes it is possible the division into plots and land can be bought or sold internally. There are common areas and reserve areas, which according to the communal statute cannot be touched.

Some areas of the municipality have erosion due to the change and use of the soil, basically, for the cultivation of corn or milpa, due to the practice of burn, the use of agrochemicals and deforestation, causing problems of performance of the soil, in the production of the corn and the coffee bean, impacting on the territorial ecological conservation of the municipality.

The topography of the communities of Guadalupe Buenavista and Reyes Llano Grande is broken, with heights that fluctuate between 1,800 and 2,500 masl, which gives rise to three types of climates: warm, mild and cold and a great diversity. There is forest of pine trees, ocote, oak, guananches.
.
The rugged terrain of the region makes it difficult to communicate and transfer people and products. The lack of gaps and ways to more easily access the plots obliges the producers to harvest crops in beasts (mules and donkeys) and in the worst case they have to carry them themselves. Many times, because of climatic phenomena, some communities are left incommunicado.

Guadalupe Buenavista has a population of 1, 200 inhabitants and another thousand migrated to the state of California in the United States; while in Reyes Llano Grande the population is 1,380 inhabitants and 600 migrants.
Migration is a very serious problem, although in the Buenavista it is greater: Reyes Llano Grande is considered to have a medium migration rate, while Guadalupe Buena Vista has a high migration rate.

The basic services that these communities have are very limited. In relation to education, in the community of Buenavista they only have initial, primary and secondary education, and in Reyes Llano Grande it is limited to the first two; the two communities have electricity and piped water, but in Llano Grande the drainage is in the process of being introduced, while in Buenavista there is not any. In Llano Grande there is a Clinic and Medical Unit and in Buenavista only small medical unit.
These communities face, recurrently, problems of water supply. To try to solve this problem, some pots have been built to supply the population during periods of drought, but they are not enough.

For the members of the cooperative, the main productive activity is the agriculture. They produce coffee, corn (mainly seasonal and a little watering), beans, lemon, banana, orange, papaya (between 800 and 900 meters above sea level). Some (particularly those with animal manure) produce vegetables. Bananas and oranges are fast-growing trees that are compatible with coffee.

There are those who have backyard birds, especially those outside the villages, because those who live where there is the highest population concentration, the government limits the possession of animals.

Coffee is the most important commercial crop, due to the value of its production and the income obtained from its sale. On the other hand, having potential in the production of fruit like the one mentioned above, but there are not sales channels for them. Only a small percentage is produced for self-consumption.

Corn production is the second most important crop, although the harvest is mainly used for self-consumption. It is grown mainly in rainfed, but some farmers can use irrigation for their cultivation. It is important to point out that corn is part of the milpa system in which, in addition to the cereal, beans, squash, chilacayota, mustard, tomato, hietaka and white beans are also planted. The milpa system is part of a food security strategy followed by the families of the two communities, because if corn is not available there is always the possibility that some of the other products will.

This is very important in the community of Guadalupe Buenavista because "the wind passes very hard" and often pulls the cane from the corn and the fruit does not grow.

There are small irrigated areas where corn is produced, which some producers interspersed with white beans. Cilantro and tomato are also grown for irrigation.
Guadalupe Buenavista also produces mustard, flowers (violets, cresons). The flowers are good, but as in the case of fruit there are no sales channels.
The partners of the organization affirm that it is necessary to diversify productive activities to better face adverse situations.

Coffee-growing is the axis of the producers’ organization. The cooperative society is made up of 107 members, of whom 35 are women and 72 are men. Of the total of members, 60 percent are between 30 and 59 years old and the remaining 40 percent are 60 or more years old; while in the case of men the percentages are 36 and 64 respectively. Only one member of the group is less than 29 years old. This means that there are practically no young coffee growers.
The Organization of Coffee Producers Yucuhiti, SC of RL de CV is one of the 43 organizations that make up the State Coordinator of Coffee Producers of Oaxaca (CEPCO).
Of the total number of members of the cooperative, there are 98 active, of which 92 growers produce organic coffee in an area of ​​157.80 hectares and 6 growers with 10 hectares are in transition. In total in the 2014/2015 cycle they produced 39, 445 kilograms of coffee.
The average coffee production surface of the members of the cooperative is 1.7 hectares. The common performance is 4 quintals per hectare, but decreases when they are renewing.
The producers organized to produce organic coffee have some problems with the free producers, because the use of agrochemicals and the little worked plots affect the production of the organic aromatic, since they contaminate and facilitate the development of pests, such as the "broca".

The Coffee production is the most important commercial product of the organization and of the producers families that cultivate it, it was calculated (with a group of partners of the organization) the cost benefit, starting from the estimation of production costs per quintal, considering only the expenses actually incurred. 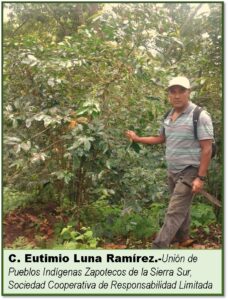 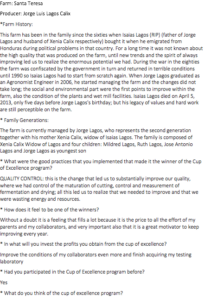 BrujuFinca was born in 2015, a small farm in Pluma Hidalgo, a historic coffee region with Denomination of…

Rancho La Sirena (The Mermaid) is located in Pluma Hidalgo, Oaxaca and it has been owned by the Cruz family…