Actually I come from Palembang South Sumatra, precisely from the city of Pagaralam where the majority of the people are Robusta coffee farmers from the Dutch era at the foot of Mount Dempo.

At first I was an honorary teacher at several schools in Pagaralam city, then I decided to temporarily change my profession to a coffee farmer, my love for agriculture flowed from my parents who had always been coffee farmers and palawija.

In 2020 I decided to move from Palembang to Aceh to be precise, the city of Takengon Aceh, was joining my brother Asman Arianto, the chairman of the Ribang Gayo cooperative and other family members, namely Mr., Mrs., Cousin and others. We settled in Pantan Musara Village, Pegasing District, Central Aceh.

Thanks to Asman Arianto's motivation and guidance, I learned many things about coffee farming patterns in Gayo, developments, future prospects, upstream and downstream of the Gayo coffee trade and others, 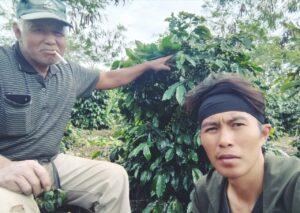 My name is Bahagia Ginting 42 years old.. From berastagi North Sumatra.. I came to Takengon Central Aceh in…

PT. Biji Kopi Internusa or abbreviated as BIKOIN, was established in 2022, with the goal to introduce…

I am Zakiah, I have been managing the garden that I have now since 2001, I got the garden from the person who…