History of the farm
Antonio Andrade Pereira Filho and Maria da Conceição Costa Pereira decided to invest in coffee production in Carmo de Minas at the beginning of the 1970s. They bought 90 acres of land and started planting the first seedlings. As the coffee trees were growing, the couple’s two daughters were born: Maria Valeria and Maria Rogéria.
Since they were young, Maria Valeria and Maria Rogeria liked to follow their father around and got involved in farm life. Decades later, when their father retired in 1996, the two took over administration of the farm. When the two married, their husbands joined forces in running the farm and, in 2002, when the specialty coffee wave began, they had no doubts about investing in specialty coffee processing. When their father passed away, the sisters decided not to split, but to make their union even stronger. As such, they changed the name of the farm from Serrado to Irmãs Pereira, as a way to seal the spirit of sisterhood.
And things improved further when CarmoCoffees was created by cousins Jacques Pereira Carneiro and Luiz Paulo Dias Pereira Filho, supporting the investments in quality on the farm with care and attention. Luiz Paulo is one of Maria Rogéria’s children. Over the years the focus on quality has provided better results for the family. With new management techniques, the family invested in specialty coffee production and new forms of coffee processing, such as pulped natural and later fermentations, honeys, and other innovative processes. In addition to the different processing methods, the coffees can be dried on African beds or conventional drying patios.
The African beds have a greenhouse with ultraviolet panels, fans, and ultraviolet light at night. This makes maturation more homogeneous and ensures that the quality of the product will not be affected. It also facilitates temperature control inside the greenhouse, guaranteeing that the coffees suffer less variation than could occur in ambient temperature. The UVGI radiation quickly and efficiently deactivates microorganisms through a physical process. The UVGI light also helps destroy chemical contaminants, such as pesticides, industrial solvents and medicines through a process called UV oxidation. The farm also has fermentation tanks for aerobic and anaerobic processes, a stainless steel fermentation tank and a curious secret: a wild yeast developed on the farm itself.

Coffee processing system
The first step is selective harvesting and only the ripe fruits are picked. Then excess dirt and dust from the harvest process were removed. Next the coffee cherries are pulped, removing the husk. Finally, the lot was dried on African beds for a period of 24 days before being prepared and sent to the warehouse.

Concern about quality
The farm invests in quality year after year through infrastructure improvement, post-harvest processing research and investment in equipment. The improvement is continuous, always seeking an evolution in quality. 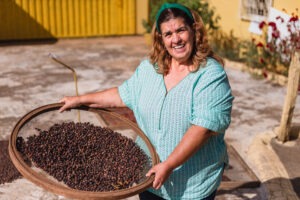 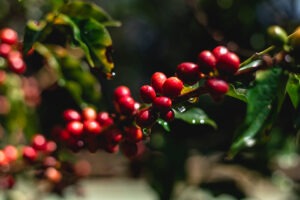 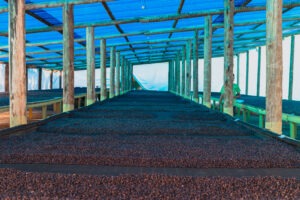 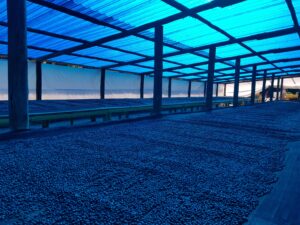 Farm History: Fazenda do Serrado is located in South Minas, in the Municipality of Carmo de Minas. It has a…

Overview FAZENDA DO SERTAO was the first farm of the group, and the reason for its name - SERTAO GROUP. With…