Almoloya de Alquisiras, State of Mexico, is located in the south-central region of the State at a distance of 130 km from CDMX and 70 km from the city of Toluca, which is the capital of the State. It is located at an altitude of 2000 meters above sea level, between the geographical coordinates: 99 degrees 46 minutes 50 seconds north latitude, and 99 degrees 57 minutes, 9 minutes East longitude. This municipality is characterized by its temperate climate and the abundance of water, what is necessary for it to be a very productive place, in terms of agricultural crops: avocado, peach, guava, all kinds of vegetables, among which the red tomato stands out, without letting the coffee cultivation pass. The first coffee seeds arrived in Almoloya de Alquisiras during the colonial era, thanks to people from Germany, who at that time settled in this town, with a mineral beneficiation farm, where minerals from nearby places arrived, such as; Zacualpan, Sultepec, Temascaltepec, these belonging to the State of Mexico, Taxco and Arcelia, these belonging to the state of Guerrero. These Germans brought coffee to this town in the state of Veracruz, and from here it spread to different municipalities in the state of Mexico that still continue to produce coffee. Some time later, in the 20th century, Almoloya de Alquisiras became an important coffee producer, to such an extent that this product was sold to companies dedicated to marketing the product in the City of Toluca and what was then Mexico City. This boom had them until 1960, from then on, the peach began to be cultivated in a massive way, consequently the cultivation of coffee was decreasing, in the seventies, the improved avocado crop called strong began to be known. And hass, with this avocado crop, interest in growing coffee began to be lost, however, many inhabitants of this municipality keep this crop in their backyards. Now the cultivation of coffee is being resumed since it has been discovered that the product has virtues of excellent quality, in terms of flavors and aroma, since it registers unique notes due to the height of 2,150 meters above sea level, the Good quality land and the purity of the natural spring water, in addition to the goodwill and affection with what the workers cultivate it, these are some of the reasons why Almoloya de Alquisiras coffee has very good acceptance in the market National and international. Regarding the cultivation of Finca La Teja, I can mention that I started cultivating 10 years ago at the insistence of my wife, I took on the task of getting coffee plants to start the cultivation and check that it was produced at the aforementioned height, already that the theory says that at that point coffee is not produced, when I observed that it was productive I continued planting more plants year after year, we treat this crop with the best organic practices without missing the selection of the best fruits to continue propagating the seed and Increasing the cultivation, the goodness of the land, the purity of the water, and the effort that we put into cultivation makes us have a specialty-grade high-altitude coffee. It should be mentioned that our processes are traditional, natural and artisanal. We do not use any chemical or toxic element for human health, the earth or the environment, the irrigation is done with clean water directly from the spring, our fertilizers are made with plant materials, stubble from the field, animal manures such as sheep, cows and horses, we also use all leftover fruits and vegetables. With this, the compost that we use to conserve and enrich our soils is made. The harvesting process is done until the cherry reaches its full maturity, that is, the fruit is well developed and with a dark red color, we have trained a group of women to carry out the harvest by hand, and thus obtain the best fruits with the necessary maturity. We continue with the natural process of drying, fermenting and washing, we do this in an artisanal way to give value to the coffee we produce at Finca La Teja. We are very satisfied that our coffee has a good acceptance in the taste of consumers, since it has been subjected to different tasting tests, including the Eighth National Cup of Excellence Contest where we reached 90 points, for this reason we are obliged to continue to grow and improve the crop to preserve and improve the aforementioned quality. It should be mentioned that within the Farm we have an apiary, in order for the bees to help us pollinate the coffee flowers. Harvest-. Personally, I want to say that I am a happy and proud coffee producer, originally from my beautiful land Almoloya de Alquisiras, State of Mexico, and I want to thank the brothers Gustavo and Julio Stein, Messrs. Pomuaerede, and Mr. Arnoldo Suter, who from the year 1824 to the year 1878, which thanks to them brought progress and the wonderful fruit of coffee. 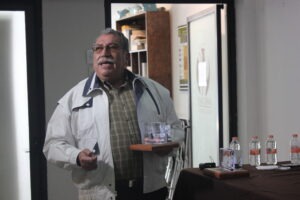 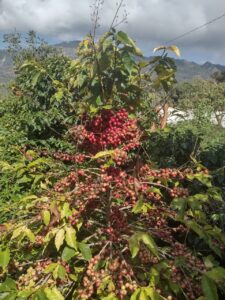 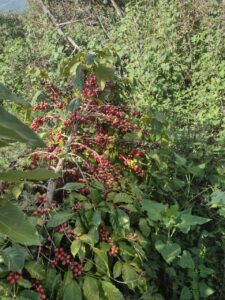 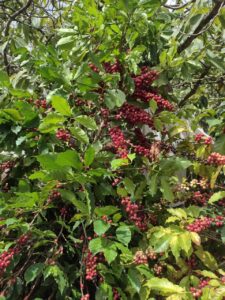 Almoloya de Alquisiras, State of Mexico, is located in the south-central region of the State at a distance of…