Lizana Morales Grimanés belongs to the third generation of his family who works in the Coffee Cultivation, but he struggled not to go unnoticed in Lúcuma, his farm that is located in the district of La Cipa, Cajamarca., At that time many Plants were affected by pests while others resisted that last was the case of grimanes in 2016 when it was announced that the first edition of the Cup of Excellence would be held in Peru, the competition that rewarded quality cafes , Marcelino Cinguel, her husband made his coffees were evaluated to know which of all could participate in the competition, the result was that the plant that best score got was the one that despite the plagues never fell, but you could not Define which variety belonged for this reason was called Marshell and it was believed that it would be the result of a lucky mutation of a variety called Bourbon, which has made it more resistant, productive and higher quality.

In the lucuma they work Grimanés and Marcelino with their children Franklin and Jhon, but decided that the sample selected for the V edition cup of excellence is registered with the name of it in recognition of their work. Grimanés supervised that only mature grains were harvested and without mixing the Marshell with other varieties, when he is asked of Grimanés what he thinks of his coffee he says he admires him. "This plant has resisted many plagues, I think we should learn from it, stay strong in front of everything," says this 46-year-old, Adventist, mother of four children and maid-life cafficore. It also appreciates the land of its farm. "The Earth is black and fertile, it is a blessing because I have trees, bananas, roses and orchids." 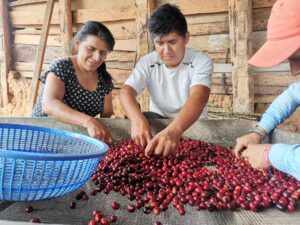 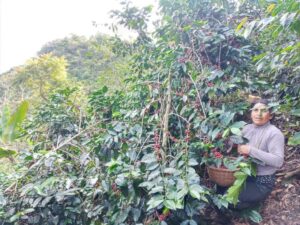