More than a century ago, two ancient coffee-producer families were being united by their offspring´s marriage: Apolinario and Adelaida de Magaña’s son, Francisco Magaña Herrera; and José Antonio and Gordiana de Cáceres’s daughter, Evangelina Cáceres Magaña.
Both family heads were very active in the production, processing and trading off the precious grain, and both had their lands in the beautiful mountains of Juayúa, Sonsonate in the Ilamatepec Mountain range. The sister farms “El Ausol”, “El Diamante” and “El Topacio” (Cup of Excellence winners), are located in that paradise. Maria Elena belongs to the fourth generation.
Maria Elena grandfather, Francisco Magaña, being an Attorney in law, dedicated his entire life to his passion, the coffee production, which he did in the best way possible, teaching the laborers to treat and pamper the coffee plants with much care and dedication. He and Maria Elena grandma, “Mama Evita”, always took some of their grandchildren for the crop season, and we had the best of times admiring those gorgeous cherries all over the place, being picked by hand, something that they loved to do, even though they weren´t much help… but they had lots of fun!
Maria Elena husband Leopoldo, being like as Maria´s grandfather to produce coffee by himself since his High School times, and has been managing their farms since the inherited them; he decided to start “El Ausol” in the coffee crop, since it had not been cultivated before, around 18 years ago. His experience and dedication has kept all labors in progress, even in the worst times that our country had to go through, and their good and efficient laborers have done the rest, thanks to them, Maria and Leopoldo have had the blessing to receive this reward for a second year.
Maria Elena thanks God and Mary His Mother for their aid and protection.
Their coffee is processed 2.5 miles away at the “El Diamante” mill, situated in the farm of that name.
The mucilage is removed naturally in fermentation tanks and they sun dried in clay brick patios 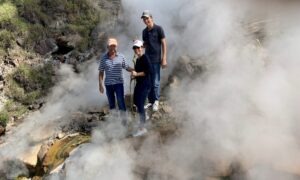 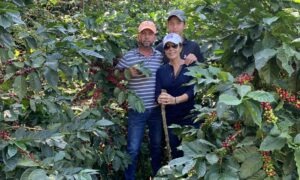 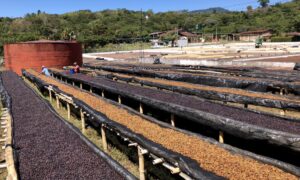