My name is Camilo Landa Vázquez, El Veladero, name of the farm can be translate as the candlestick. It is a farm located in the community of San Martín, municipality of Jilotepec, Veracruz, with height of 1150 meters above sea level, with a type of soil mostly volcanic stone. The weather is varied, warm in the months (March - August) and rainy (July - September).
Although the history of this farm dates back 45 years, when the previous owner began planting coffee plants and trees such as Avocado, Chalahuite (Inga vera Willd), fig among others, it was 7 years ago that the farm oversees the Landa Sánchez Family and 5 years ago, the varieties on the farm were changed as a result of the rust plague.
Seed of the geisha variety was obtained, so a nursery was made and plants of the Colombian and Costa Rican varieties were bought, it was two years that we waited for this new planting to produce coffee again and a year later it was when we obtained the first cut of these new bushes.An approach of percentage of varities cultivation in the farm is Geisha 40%, Colombia 30%, Costa Rica 95, 30%.
This farm currently has the varieties of Costa Rica, Colombia and Geisha, but it is not the only crop that is grown, it also has bushes of piquín (Capsicum annuum )and wax chili (also known as Morongo), fruit trees such as orange, lime – lemon, avocado, chinini and shade trees such as fig, chalahuite, jinicuil that help with their shade and provide a lot of leaf fall that serves as fertilizer for the plants. We try not to use fertilizers, fungicides or other chemicals that damage the soil, one of the fertilizers is the pulp of the pulped coffee and the compost is made with the parchment coffee straw that is milled.
This year is the first time we participate in COE Mexico. After a course given by AMECAFE, on coffee quality, the process that we gave to it was perfected, although it is true that previously we cut the ripe coffee cherries, this year to produce specialty coffee a fermentation was implemented 48 hours in a concrete tank and drying was carried out in raised beds to avoid contact with the ground and achieve a cleaner coffee. All this was thanks to all the people who helped us cut and select, to Fidel López who oversees taking care of the farm, to my wife Teresa and my daughter Aline, who oversaw drying and selecting the coffee, as well as to the Ing. Carlos Quiroz who helped us in the preparation of the sample that was sent for the 2022 Cup of Excellence competition.
The farm coordinates are 19.62431, -96.88814. 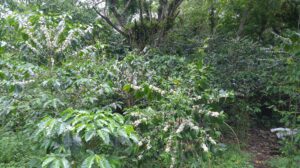 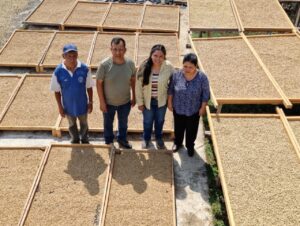 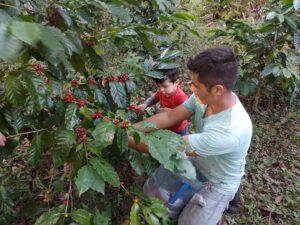 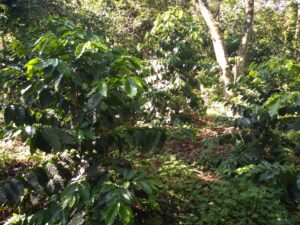