The farm produces coffee at various heights, from 900 to 1,450 meters above sea level. Cerro de Jesús, where we are located and from which we derive our name, has a height of 1,836 meters and is the second highest peak in Nicaragua. The property is also part of the Dipilto and Jalapa mountain ranges on the Nicaraguan border with Honduras. This mountain range includes the Cordillera Dipilto and Jalapa Natural Reserve, which has the Cerro Mogotón, which, at 2,107 meters, is the highest point in Nicaragua.
• Our facilities include a nursery, where we generally plant and grow approximately 50,000 plants per year that are then planted on the farm. Cerro de Jesús also has a wet mill to pulp, ferment and wash our coffee before transporting it to the dry mill. Story:
• The El Cerro de Jesús farm was founded in 1999 and has been managed by a family for much of its history. The current management is headed by Laura Lintner, the Nicaraguan daughter of one of the founders of the farm. Laura is supported in her role by a team of experts, which includes both external professionals and workers trained on the farm, whose experience and dedication to the success of the farm has earned them leadership positions within it.
The founders of the El Cerro de Jesús farm had two parallel motivations for its founding: the desire to produce quality coffee and to preserve the natural environment and the community that is home to Cerro de Jesús. The farm's first activity was to immediately halt slash-and-burn practices on the newly acquired lands and establish the private forest reserve. Initial activities also included the construction of a primary school, which currently houses some 30 students (including students whose parents do not work on the farm), as well as a church for the Cerro de Jesús community and its neighbors. A main road to the farm was also built (which is largely self-funded due to lack of public funds for rural roads), and electricity was installed, which has benefited both the farm and its neighboring communities. . Environmental importance:
• Cerro de Jesús enjoys a unique and privileged position in Nicaragua, which makes it a mecca for scientists. It is proving to be an important focus of study for science as it is located in an area that was historically isolated and never visited by early naturalists. It remained isolated during and after the civil war of the 1980s due to both the conflict and the dangerous landmines that had been planted in the area. After its purchase by the current owners and the removal of the mines, the forest has continued to be protected, and although it is recently accessible, it still houses its original biodiversity.

Cerro de Jesús contains and preserves important biodiversity. Scientists from leading universities in the United States and Central America (such as Zamorano University (Honduras), the National Autonomous University of Nicaragua (Nicaragua), the University of Montana (USA), Texas A&M (USA) and the University of Ontario (Canada) They visit the farm periodically to study its flora and fauna, an effort actively supported by the farm owners. These scientists have documented more than 150 species of orchids, including seven previously unknown in Nicaragua. Resident birds include the resplendent quetzal, nesting colonies of two species of oropendola, three species of toucans, and the king vulture (jungle condor), not to mention migrants from the north. Large mammals include large populations of howler monkeys, agouti, and deer, as well as occasional sightings of collared peccary, cougar, jaguarundi, margay, kit fox, and porcupines. Herpetologists have also published reports of previously unknown species in Nicaragua. They also discovered seven new species of beetles, including the Enaphalodes bingkirki, and three new species of tree cricket, including one named after the farm, Oenocanthes cerrojesusensis. The additional species discovered last year are still under investigation. In total, the fauna and flora of Cerro Jesús have been the subject of at least 12 scientific articles that we know of, with others in preparation, making it one of the main field research centers in Nicaragua.
• With its many natural springs, Cerro de Jesús is an important water source for the Nueva Segovia region. The springs of Cerro de Jesús feed a network of streams and aquifers that constitute the main source of water for the downstream communities, including the city of Jalapa, whose population increased by 63% but continues to grow, and the Jalapa Valley , an important agricultural area that produces staple foods such as rice, corn, and beans, as well as specialty crops such as coffee, tobacco, and cocoa

The El Cerro de Jesús farm is certified with the Rainforest Alliance since 2012 to date. The Rainforest Alliance program requires compliance with a series of strict environmental, social and farm management standards, including strict controls regarding the use of approved agricultural inputs.
• All of our coffee is grown under shade and our streams are protected, and our shade trees and riparian areas offer important habitats and biological corridors to the Cerro's wide range of animal species.
• As one of the tallest coffee farms in Nicaragua, El Cerro de Jesús is well positioned to adapt to the growing challenges of climate change and will be able to offer high quality coffees in the future (such as Java, Pacamara, Maracaturra, Caturra, Catuaí , Tekisic, Hibrido H1, Marsellesa, Obata and Catimor), while low elevation coffee farms are likely to have much more significant challenges in this regard. Socio-economic impacts: • As part of El Cerro de Jesús's commitment to Rainforest Alliance certification for much of its history, El Cerro de Jesús treats its employees and seasonal workers with dignity and provides a range of services to the community. local (including donating a school, building a church, supplying electricity and a public access road to the community, as well as supplying a non-profit commissary). We are a major employer in the Jalapa area, employing approximately 100 permanent workers and 300 seasonal workers, most of them from the nearby small town of El Escambray. Although many of the farm's jobs are seasonal, our staff has remained stable, and a significant number of our workers have been on the farm for more than seven years, some since its founding. We employ more than 100 women (permanent and seasonal workers); our key personnel include two women in management / administration (including our general manager) and two women field foremen. 3
Cerro de Jesús complies with, and in many cases exceeds, national laws and legal requirements regarding the treatment of our workers, which includes offering competitive wages and social benefits (including wages above the minimum wage for our field workers) , as well as decent housing and nutritious meals for our workers.
• We provide ongoing training to our employees regarding farm management and the proper and safe use of agricultural inputs, including the use of protective equipment when applying approved agrochemicals. We also foster a sense of community and belonging among our workers, with monthly meetings that give all workers access to administrative staff and keep them informed about the activities and objectives of the farm.
• The farm is committed to being a good neighbor and member of the community. We actively support our local elementary school, helping with school supplies and supporting student events. We also supply and serve a commissary that provides basic food and other products to employees, seasonal workers and the local community, as well as a medicine dispensary for our workers. Due to our maintenance of public roads leading to the farm, there is now public transportation to the farm and the neighboring community, allowing our workers and neighbors access to critical services in Jalapa and its surrounding communities. • We are also a major contributor to the local economy through our purchases of goods and services (including food and other materials for our workers, as well as transportation and dry processing services), and the wages we pay and the expenses we incur. they have a significant multiplier effect on the local and regional economy. This is especially notable in Jalapa and El Escambray; We estimate that approximately 30% of the residents of El Escambray have worked on the farm at some point. Our coffees:

We estimate that our next harvest (2021-2022) will consist of approximately 3,123 gold quintals, distributed among our nine coffee varieties as follows: Harvest Estimate 2021-2022 Variety Quintales Oro% Java 79 3% Maracaturra 124 4% Pacamara 100 3% Caturra 1,521 49% Catimor 209 7% Hybrid H1 154 5% Marsellesa 140 4% Red Catuai 765 24% Tekisic 31 1% 3,123 100% 4 • Cerro de Jesús has quality as well as a diversity of coffee varieties in our estate. Our coffees taste well, with each of our nine varieties reaching a score of 85+ in this latest harvest (2020-2021).
• We currently have 15 renewal blocks of the Obata variety. Awards:
• Our coffees have been awarded nationally and internationally: ⎫ In the Nicaragua Cup of Excellence Contest in 2018 we received the following awards:
• Third place (Pacamara variety)
• Presidential Award (for coffees that taste over 90 points) (Pacamara variety; score 90.38). ⎫ In the 2014 Nicaragua Cup of Excellence Contest, we received an award for having reached a seventh place.
• We generally sell our coffees at a price with a differential above the market price. Over the past two years, these spreads have ranged from $ 10 to $ 180 per quintal. Our Java typically sells for over $ 3 / lb, and our 2018 award-winning Pacamara sold for over $ 10 / lb. Our coffees have been exported to Japan, Australia, the United Kingdom, Ukraine, and the United States. Our wet and dry benefits:
The farm hopes to stop relying on financing from dry mills / exporters to gain greater independence and exercise greater control over the marketing of our coffees, which would ideally result in better prices. Given the current price of coffee, increased quality and more direct business relationships with buyers appear to be the key to sustainability for coffee producers. Objectives of the farm for the agricultural cycle 2021-2022 and subsequent cycles:
• Provide the farm with the inputs and tasks necessary to guarantee a successful harvest from 2021-2022.
• Provide support to our developing plantations that have not yet reached their productive stage. • Pacamara, maracaturra and java varieties have had a very good reception in the market in recent years, with offers of over $ 300 per quintal, so these coffees are treated with a better investment in their agronomic management.
• Continue to focus on specialty coffees and micro-batches both in-process washed as Honey and Natural.
• Continue with the farm's 5-year management plan to increase our production per apple.
• Continue our efforts to improve our quality control from field harvest to shipment to buyers.
• Ensure the sustainability of the farm and, therefore, continue providing employment and social impact programs to our employees and neighbors. (As a major employer in the local community, ensuring the farm's survival is key to the local economy.)
• Continue and improve our environmental management and good environmental practices, including through the use of our pulp (converted into organic compost). • Renew our Rainforest Alliance certification. 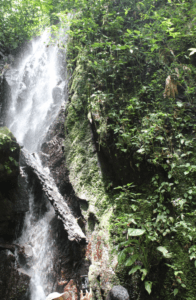 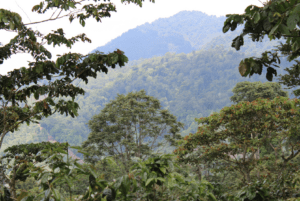 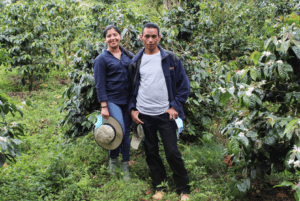 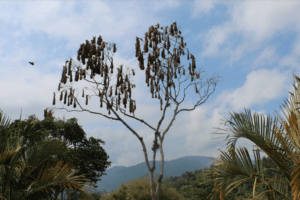 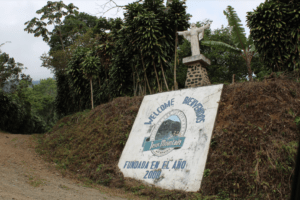 The farm produces coffee at various heights, from 900 to 1,450 meters above sea level. Cerro de Jesús, where…

Overview Our farm was inherited from my husbands father, Tomas Marin, since 1983 and before Mr. Marin…

Overview In 1999, I inherited a farm from my parents. But in that time, the land was only for cattle…