With three Arabic coffee plants in the year 1997, Mauricio Rosales and his father Guillermo Rosales purchased a piece of land of about 21.84 hectares. Situated in the village of Los Arroyos, through the dismembered farm El Injerto II, accessible only by foot or on horse, through the road that leads to El Injerto. Without electricity, structures, and scarce economic resources but with great effort, hope, and motivated by fellow coffee growers of Huehuetenango, they decided to work intensely. Sr. Guillermo led the agricultural area while his son Mauricio Rosales took the administrative role. Thus began their first sowing in July 1997 with 1.21 hectares. Their first sow was possible thanks to plant donations from Sr. Octavio Alfaro, and Sr. Hugo William Avila Diaz and 2500 additional plants were bought from Finca El Injerto II. The economic costs were elevated considering the transportation for the plants was done with mules the same as with the supplies, and other materials needed for the construction of two wood houses. These buildings would be used as homes one for the field foreman and the other for Sr. Guillermo Rosales, whom allocated himself with many limitations, putting himself in the forefront of such desired project. After being one of the repatriated affected, losing all of his patronage in Reyna de Ixcan, due to the Navy Conflicts, his spirit of love and the work for the land, maintained him strong and willing. In previous years, Sr. Guillermo Rosales had worked for the United Fruit Company, in Tiquisate, Escuintla. While working there, he acquired much experience with the land as well as with personnel. He soon surrounded himself with a group of job collaborators from the village, with whom, years later he worked in conjunction in the Maravilla project. La Maravilla, its name surging after evocated spontaneously by the producer at his own marvel of the undoubted beauty he contemplated while first arriving at the land.
In the following years they continued to sow an average of 2.5 hectares a year, making master trees in the farm with Bourbon seeds coming from the farm El Injerto I, and Caturra coming from the region of El Pajal, San Antonio Huista. Next to it, they began constructing the foundations for its first patio for drying, as well as obtaining portable equipment to peel and, process the first harvest in the year 2000. The harvest was of 13quintals parchment (1,300 lbs). Given the pressing necessity to prepare the foundation for the process of future harvests, by the producer’s own initiative, farm workers with the support of neighboring producers and the help of Los Arroyos community, Sr. Guillermo proposed to make an opening for double traction vehicles road. With pickaxes, hoes, and shovels on hand along with a tremendous determination, workers began the opening in 2001. With God’s blessing, in 2002, the first double traction vehicle went up the road to the center of the farm. Such goal was a great step for a longing project.
Despite the difficult years due to the drop in coffee prices did not unmotivated the goals and purpose of La Maravilla project. This was in part due to the passion and trust producers set on the production of coffee. In 2004, La Maravilla expanded after a connected piece of land was purchased of 3.27 hectares. Throughout the years father and son shared much farm work and great experiences including the 2004/2005 harvest. On April 2, 2005, Sr. Guillermo Rosales passed away at the age of 82. He passed away with great satisfaction of having planted the seeds, cared for the plants, and thus, creating the foundation to produce a coffee of excellent quality. Coffee, that can be enjoyed by the passionate world of this drink.
In 2008, the work began for the construction of a more spacious locale for the coffee process and procedure quarters equipped with machinery and dimensions with the capacity to process the farms total harvest. This would improve the quality while conserving the environment. In it, are sedimentations with trenches/pits to treat honey waters. Currently, it includes a tank that can hold and store 42,000 litters of water, a module of 14 rooms to accommodate groups of casual workers and a new house for the field foreman. 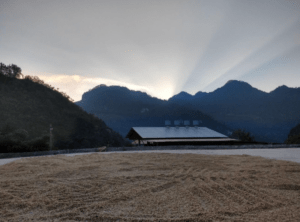 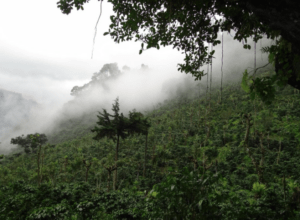 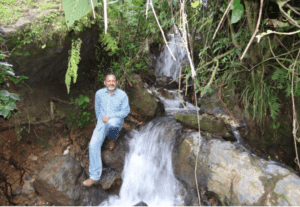 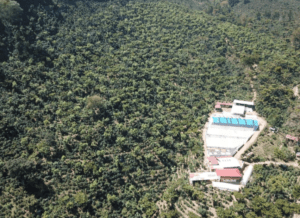