Edinson is Agronomist and Business Administrator, he has been working in coffee production for 15 years, being the first time competing in the contest and having made it to the auction makes him realise about the great work he’s been doing all these years. His decision to participate was to promote his farm and the coffees he is growing such as Gesha, Caturra and Bourbon.

Edinson says that before competing, he learned first about the quality he is producing in order to be well prepared with his coffee. He has been implementing a special infrastructure in his farm that has allowed him to constantly improve the quality of his coffees. He also expects to create a formal company based on his academic knowledge that allows him to keep his coffees at a commercial level. 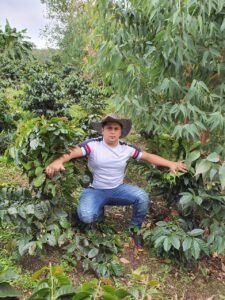 History Luis Carlos is another traditional coffee grower, he has Colombia and Caturra Varieties in the…

History Abel Bermeo is a single, 39 years old coffee grower. He lives with his parents (Alicia and Alvaro),…

Overview: Edilma Piedrahita Santacruz, is a daughter of a coffee traditional family, she has dedicated her…