Nueva Granada is the last farm acquired by the late Jose Maria Rodriguez, Roberto’s grandfather, during the winter of 1987. It is located at 1,380 m.a.s.l. in the town of Ataco, Ahuachapán, just 10 minutes away from Apaneca. The farm is about 5 hectares. The plot where the competing lot was taken belongs to Roberto and is only about one and a half hectare planted with both Bourbon and Elefante.
The lot variety is Elefante, which is a variety discovered around eight years ago on one of his family’s farm, and has Ethiopian landrace and the world-famous Bourbon genetics according to a new research carried out last year by the family with the World Coffee Research (WCR).
This variety has a few variations that are still under additional screening by the family to secure one outstanding elite coffee variety but first genotypical studies have been really encouraging and also practical results such as last year, where another lot from this same variety and farm ranked third place at 2017 CoE from and 3rd place in 2018.
These cherries are nearly two times heavier than Bourbon due to its larger amounts of mucilage, its mucilage flavor express both a honeysuckle and ripe papaya/tropical fruit very similar to the Ethiopian strains. Although the cherry is round, the seed express some long characters similar again to some heirloom types. In some beans it is also possible to find a little horn on one of the sides of the green bean. It is not rare to extract around 9 to 15 drops of mucilage per cherry. The tree is a low yield variety and has a high cherry-to-green bean ratio, meaning we get lower green bean for the same amount of cherry weight from this variety in comparison to Bourbon, nonetheless, screen size is better due to the larger size of the screen of Elefante.
The cherries were treated under rigorous harvesting quality standards, carried by a specific picking team, supervision of cultural practices, meticulous harvest, milling and slow drying in raised beds.
Other cultural practices include: Manual weed control, shade tree pruning, off-shot thinning, soil conservation practices, wind-break barriers management, root and stem bending, as well as a renewed attention to better nutrition of the plant and soil life improvement, among others. A huge importance is obviously given to harvesting only the ripest possible cherries, measured visually, tasting mucilage and by using refractometer. Cherries are depulped and processed the same day, dried on raise beds only for 18-20 days, aiming for 11% moisture, then parchment is rested for about a few days and then stored on grainpro plus jute bags.
Additional lot information
Rainfall: 2,200 mm
Soil type: Sandy Loam
Temperature: 20 °C
Elevation: 1,380 masl
Total production (69kg bags): 20 bags (2021)
Shade trees: Ingas Sp. (Pepeto peludo), mountain trees.
Fauna: Deer, armadillos, small felines, agouti, pocket gophers, possum, squirrels, snakes, birds of prey, magpie, etc.
Mill and company where lot was process: Beneficio El Carmen, Agricola San Agustin.
GPS Coordinates:
Nueva Granada
13° 50′ 56.39″ N
89° 51′ 20.80″ W 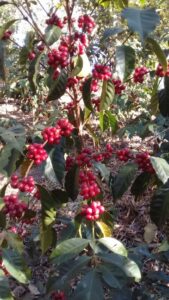 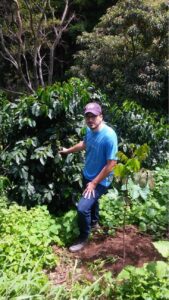 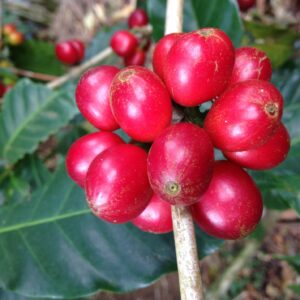