Pablo is Architect and inherited his father’s farm located in Tangua, south part of Nariño which for a very long time used to be a region renowned for growing cereals of different kinds. Due to the government imports of cereals, they had to find other ways to replace these crops. Pablo explains that they tried to produce different kinds of fruits but it didn't give them the income they expected. Finally, in the early 2000’s they started with coffee production in a region where coffee was not traditionally produced and for many years had to sell their harvest to the local cooperative until the transition to the production of high quality coffees started in 2010 giving to El Obraje coffee farm several recognitions internationally.
This is the second time that Pablo participates in the Cup of Excellence contest. Last year he occupied the 8th place with a natural processed Gesha lot. He explains that for this year’s contest he focused primarily on a strict selection of the cherries and control of the fermentation process to the desired cup profile he was looking for which gave him the first place and a great satisfaction for the hard work.
El Obraje coffee farm has become a vertical model of farm and coffee shop Obraje Café Especial with the aim to offer high quality coffees to the national and international market. It has also allowed Pablo to create partnerships with a local cooperative in order to provide assistance to other coffee growers so they can also export their coffees. 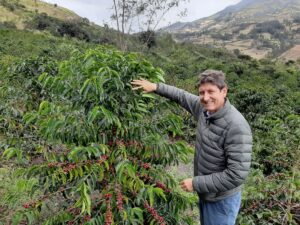 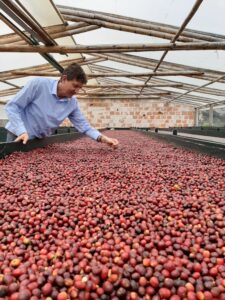